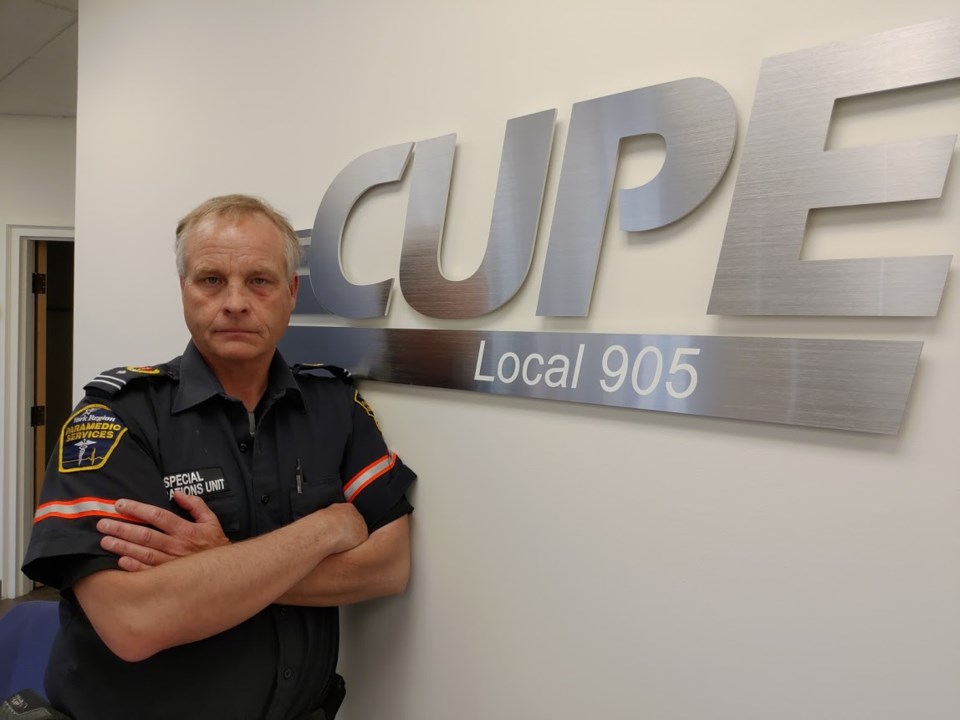 Frontline workers in York Region are calling for more support from their employer for their health and well-being.

Greg Watkinson, a York Region Paramedic Services paramedic, said they are at a breaking point.

Changing policies, cleaning processes and requirements for personal protective equipment have all lengthened calls and forced frontline workers to adjust to things on the fly, he said. On top of that, a lot of the calls recently have been COVID-19 related.

“Now in our third wave, we’re just seeing really sick young adults. That seems to be the majority of our calls and most people, going into those homes, they’re confirmed COVID positive or they’re screening COVID positive,” Watkinson said. “We’re seeing an increased frequency, as well as severity of people’s conditions.”

“(There’s) a sense of dread or fear and … everyone’s just burned out and kind of on their last legs,” Watkinson said.

His union, CUPE Local 905, said an increasing number of employees who are off work has added to the strain for the frontline workers.

In hopes of supporting workers who require time off, either due to injury, COVID-19 or mental health, the union requested that its injured worker representative, Lorne Cowx, be released from paramedic duties.

However, Grzejszczak said York Region denied the request, responding that Cowx plays a vital role on the frontlines that would be hard to fill.

He has been a paramedic for 35 years and spent more than a decade in the injured worker rep role supporting fellow frontline workers, all while working 42-plus hours per week, she said.

CUPE 905 is calling for him to be given leave from his frontline work to provide needed full-time support to his fellow union members.

“This injured worker rep being denied the leave, [workers] just don’t feel like their mental and physical well-being is being prioritized at this time by the employer,” Grzejszcak said.

Watkinson agreed it would go a long way toward showing support.

“Having someone like Lorne off can just make sure we’ve got (someone) dedicated to checking in with people who are off injured,” he said.

He also said the injured worker rep’s role is vital in navigating the paperwork and processes involved in making claims to the Workplace Safety & Insurance Board, especially for employees on leave due to mental health or PTSD.

He thinks the move would be beneficial for Cowx, too. “For his own personal safety and wellness, I think he needs it as well, so that’s why we were working with the employer to try to find a solution to also meet their operation concerns,” the paramedic said.

The union said it has been in talks with the region for six months now and a meeting with management is scheduled for today, May 21.

“We just want to work collaboratively with the region to provide support to return members back to work in a timely manner and to prevent members from having to go off on sick time in the first place, so that we can continue providing these crucial services to the community,” Grzejszczak said.

In an email statement, Patrick Casey, York Region director of corporate communications, said, “The health and well-being of paramedic services staff has always been, and remains, a top priority at York Region. We offer a number of corporate and peer-led supports to support all of our staff, including those who serve on the frontlines each and every day.”

He said talks with CUPE Local 905 are ongoing.

“York Region has been involved in discussions with the union regarding this request for a full-time leave. Members continue to have access to union representation,” Casey said. “This is an internal matter between the employer and the union, and we will continue to engage with the union on these and other important matters.”

This meeting comes on the eve of Paramedic Services Week, and Grzejszczak said union members are hopeful to see more action than just appreciation.